Access Elevator sells and services Stair Chairs in and around Buffalo Grove and Chicago Illinois. We specialize in all brands of Stairlifts such as Bruno, Stannah, Harmar, Sterling, Handicare, Acorn Stairlifts and more. Regardless of what brand you have or would like to have professionally installed in your most important asset, your home. The Stairchair pros at Access elevator can help.

Buffalo Grove a great place to visit, live, work and play in Illinois 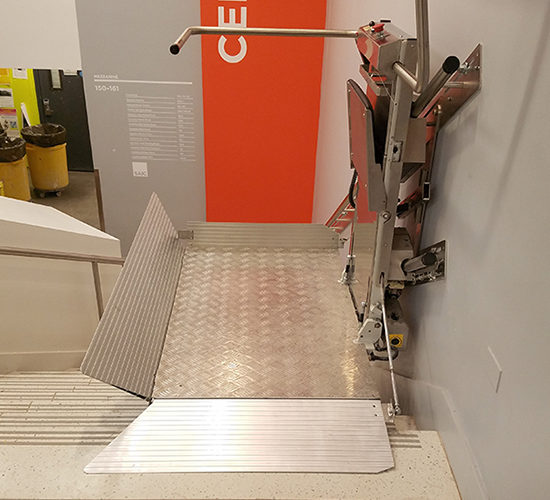 Throughout the summer Buffalo Grove hosts a Farmer’s Market at the Spray and Play Pool on McHenry Road west of the intersection of Buffalo Grove Road. In 2014, the Buffalo Grove Park District opened the Community Arts Center, which houses a theatre space and classrooms. The theatre is used by the Park District’s local theatre company, Big Deal Productions.

If you or someone in your family has mobility challenges at home, we can help. Whether you have a need for a Straight Stair Chair, Curved Stairlift or an Outdoor Stair climber we have them all ready for you to install quickly and safely.

A Great History in Buffalo Grove and Chicago, Illinois

New Englanders established the first farms in the area, followed in the 1840s by Melchior Raupp and other Germans. Farmers carried their harvest in wagons along 34 miles of dirt roads to Chicago. Mainly Roman Catholics, these German settlers raised $300 and donated seven acres of land to build St. Mary’s Church in 1852. Although a few years later arsonists destroyed the church, it was rebuilt in 1899 at Buffalo Grove Road and Lake-Cook County Road. Additions enlarged the structure in the 1980s. Around the turn of the century, dairy farming was extensive, prompting J. B. Weidner to build a cheese factory. When the price of milk rose, the cheese factory closed. In 1899 Little Mike’s Place located across from St. Mary’s Church and had a bar, dining room, dance hall, sleeping rooms, and a place for horses. A century later the establishment remained in operation with its original bar intact as Lou Malnati’s Pizzeria.

In 1930s Dundee Road became the first state concrete road in northern Illinois, improving automobile access. Development began in earnest in 1957 when builder Al Frank purchased one hundred acres of farmland and began building ranch-style houses, generally without basements. Following incorporation in 1958 the village grew from 164 to 1,492 residents within two years. Other developers, including William Levitt, who built Long Island’s Levittown, entered the market. Population escalated with large subdivisions such as Strathmore and the Woodlands at Fiore.

In the 1970s Jewish families flocked to the area, and by the early 1990s, there were six synagogues in Buffalo Grove. At the end of the twentieth century Jews constituted approximately 30 per cent of the village’s population. Growth has not been limited to residential subdivisions. Buffalo Grove Commerce Center was developed in 1981 with 50 acres of a light industrial park at Lake-Cook Road and the Soo Line Railroad tracks. In the mid-1980s Corporate Grove industrial park was erected to the east and Buffalo Grove Business Park was constructed to the west. Expansion continued into the 1990s to the north with Arbor Creek Business Centre at Aptakisic Road and Barclay Boulevard, and Covington Corporate Center on Busch Road.

By the end of the twentieth century, the village had grown from 67 acres at incorporation to approximately 5,000. Population in 2000 stood at 42,909.

If you have Mobility challenges let us help you with a New Wheelchair van from our Access Mobility caravan company. Please check out our website at www.accessmyride.com we can help get you to any of Buffalo Grove’s favourite attractions safely and easily. We offer Wheelchair vans and Wheelchairs trucks as well. Come and test drive one today. We will remove barriers and advance your independence, it’s our speciality!

Need a wheelchair ramp at home? We can help! Access Elevator offers professional sales and installation of Wheelchair ramps in Buffalo Grove and all Chicago surrounding areas. Give us a call today for a FREE no obligation estimate.

Contact Us Today To Discuss Your Free Mobility Assessment